Microelectronics X-Ray Imaging – Seeing Through to the Root of Failure 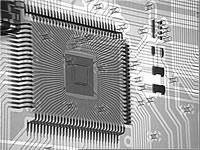 Microelectronics X-Ray imaging allows an analyst to see the inner workings of a device without disturbing its physical integrity.

What is Microelectronics X-Ray Imaging

Most modern electronic devices are packaged as proverbial “black boxes.” It is nearly impossible to tell what is happening inside a device by looking at the outside packaging. What’s more, many devices are designed to be virtually impossible to open without causing irreversible changes to the product.

These types of electronic devices pose a unique problem for a microelectronics failure analysis lab – without being able to see the functional pieces of a device, it is nearly impossible to find a failing component or signal.

X-Ray Imaging Can See Without Destroying

While there are a plethora of destructive techniques available, allowing the analyst access to the “guts” of an electronic device, these techniques often carry with them a certain level of risk; destructively opening an integrated circuit or another assembly can, in very rare cases, induce damage.

To help prove beyond reasonable doubt that any damage an analyst finds was pre-existing and not created during the course of the analysis, a non-destructive way of looking inside the black box is necessary. X-Ray imaging lends itself perfectly to this application, penetrating the shroud surrounding most devices with ease.

The x-ray imaging systems used for failure analysis work in much the same way as those used for medical procedures, albeit at a much lower power level. By using an x-ray source and detector, an analyst can study the internal structure of a device to look for defects in the same way a doctor might study an x-ray to look for fractured bones.

Depending on the type of device and the reported failure condition, microelectronic x-ray imaging may be used to look for many different things. When studying an integrated circuit, for example, the x-ray can easily reveal problems with bond wires or flip-chip bumps, often showing open-circuit or short-circuit conditions and eliminating the need to open the package at all. Indeed, in some cases – for example, in the case of adjacent bond wires touching due to wire sweep during packaging – traditional decapsulation of the device can remove any evidence of the failure altogether!

X-ray imaging can also be useful for failure analysis of printed circuit assemblies. Since most modern circuit boards use multiple layers of conductive traces to route signals from point to point, it is not always possible to visually trace the electrical path between components. Since the x-ray can reveal all layers of a board simultaneously, following a signal and pinpointing a failure site is much more straightforward. Furthermore, some defects that may not be evident on visual inspection, like improper via drilling or component misregistration, can be identified much more readily with x-ray imaging.

Non-destructive testing (NDT) – gathering data about a sample without causing any irreversible harm or change – is one of the most important steps of failure analysis. By allowing an analyst to study the internal machinations of a sample without disturbing its physical integrity, x-ray imaging is an integral part of the NDT process.