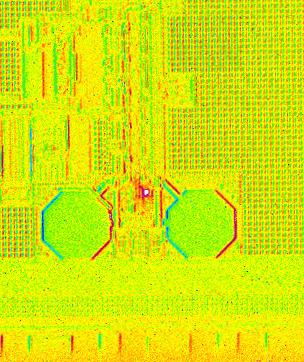 One of the fundamental truths of electronics is thus: all devices generate heat to some degree. Some heat emitted by devices is normal – after all, millions of transistors, switching off and on millions of times a second, will consume sizeable amounts of power and therefore produce a considerable amount of heat. However, there are certain types of defects that increase power consumption, thereby increasing the amount of heat given off by a device. While this additional heat is immaterial to the engineering team responsible for the design and production of a device, it can provide a useful avenue for isolating the item that they’re truly interested in – the defect itself. Using thermal emission microscopy, slight differences in temperature can be turned into useful data about a device, enabling a failure analyst to drive to the heart of a defect and determine the root cause of failure.

Similar to emission microscopy techniques that measure visible or near-infrared light, thermal emission microscopy is performed using a highly specialized camera attached to a microscope. This camera is sensitive to photons with wavelengths of anywhere from 3 to 10 microns. These wavelengths correspond to heat, rather than light; as a result, the image obtained with the camera is a thermal map, with all the colors of the rainbow standing in for different temperatures measured on the surface of the device. Usually, a device will be imaged thermally with the power turned off, to establish a baseline; then, the device will be powered up and imaged again. The resulting image is a visual representation of a device’s power consumption and can be used to isolate a failure (or, alternately, admired for its psychedelic qualities).

There are many different types of defects that generate heat when power is applied. Certainly, anything that causes excess current to be drawn – short circuits between power buses, improperly functioning transistors, damaged ESD protection diodes – will glow like the smoldering embers of a campfire when examined with thermal emission microscopy. This distinctive signature often allows an analyst to directly pinpoint a defect or damage site, greatly simplifying the deprocessing and failure analysis process.

Despite its utility, thermal emission microscopy does have its limitations. Due to the nature of the long wavelengths of energy being analyzed, there is an inherent limit on the resolution and magnification that can be obtained with a thermal imaging system. It is useful, then, to use thermal imaging in conjunction with other techniques, like light emission microscopy; and, as always, it is vital to have an experienced team of analysts who can correctly interpret the data, choosing the proper test to guarantee the greatest probability of successfully locating the defect.

Derek Snider has been an employee at Insight Analytical Labs since 2004, where he currently works as a Failure Analyst. He is an undergraduate student at the University of Colorado, Colorado Springs, where he is pursuing a Bachelors of Science degree in Electrical Engineering.